TO FORGET ABOUT THE MILLION KM CRIME: The FBiH government plans to invest more than a million marks to repair the image

The Government of Federacija BiH does not regret the budget money to repair the severely damaged image in public. This PR at the expense of the citizens should help to at least briefly forget the image of the prime minister on the defendant’s bench and the poor response to the pandemic. A paid report would be a story of personal success.

The government of the Federacija BiH has planned to give more than a million KM for its own marketing in the last few months. Although she "packaged" the allocation of money in the spirit of reform, it is quite clear that this is PR at the expense of citizens in order to forget, at least for a moment, the bad results of the "Covid laws" but also the image of the prime minister in the courtroom.

The citizens of the FBiH witnessed the catastrophic measures of the Government during the pandemic, about which Žurnal has written several times so far. Paid reports and projects will hardly change that picture and the real situation on the field.

Transparency of the work of the Government of FBiH in the implementation of reform processes - the project of the Government is worth 815 thousand KM. This is not the final amount, as the part of the public call related to one of the modules has been cancelled. If it is activated again, it means that more money will be set aside.

The money for this project is provided by the budget of FBiH under the item, Contracted and other special services.

Although it gives so much money for "transparency", the FBiH government in practice still fails the first test. Journalists from Žurnal asked the Public Relations Office for a record of the opening of applications/offers for a public invitation, but after several days of waiting, the Public Relations Office told us that they did not have the requested information - they are in the possession of the General Secretariat.

Last year, the Public Relations Office spent almost 400 thousand KM. Out of that amount, close to 310 thousand KM is planned for salaries and expenses of ten employees.

In the transparency project for which it will provide almost one million KM, module 8 reads: Improving transparency in the work of the FBiH Government by strengthening the channel of communication with the public. Module value: 95 thousand KM.

In addition to the number of employees in the Office whose job it is, the Federal Government pays extra for communication with the public.

In addition, the first two modules do not refer at all to what is stated in the title of the project itself - improving transparency and reforms. The two modules for which about 240 thousand KM were paid refer to the measures and activities of the Government related to the coronavirus. The expected result is probably praise for the diligence and success of the Federal Government in the fight against the pandemic. As this success does not exist in reality, its creation must be paid handsomely.

Seven modules worth 815 thousand KM were given to the ZPR agency from Sarajevo, owned by Zinaida Jamakosmanović. Without prejudging the irregularities, let us remind you once again that the Government does not want to submit the contract award documentation to the journalists of Žurnal. 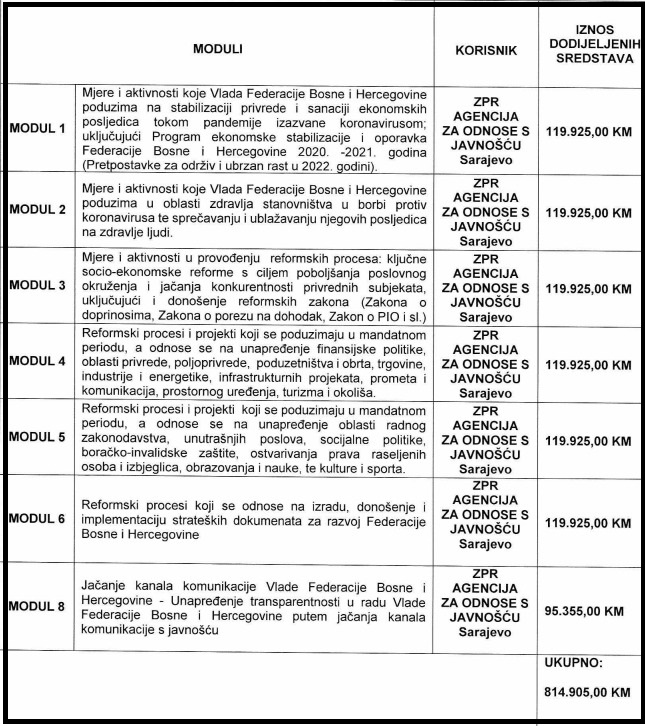 This, unfortunately for the federal budget and the citizens, is not the only PR ambition of the Government. Federal auditors, we wrote, analyzed in detail the measures and activities of the Federal Government in the fight against the pandemic and assistance to the economy. As their reports were not at all positive for the Government, it was decided to pay such.

128 thousand KM is planned for that, with VAT around 150 thousand KM. In October this year, a public call was issued for "evaluation of the effect of the measures of the FBiH Government on mitigating the consequences of the Covid-19 pandemic". Ordering a special report means that the government does not trust the federal audit institution and does not recognize its reports.

The invitation was cancelled in the beginning of November because no offer was submitted. The praise will have to wait a little longer.

Until then, let us recall the part of the audit report on the activities of the Government in preventing the consequences of the pandemic. Although the Law on Mitigation of Negative Economic Consequences provided funds in the amount of almost 500 million KM, only 18.63 percent, or close to 91 million, was realized, and only for subsidizing contributions for compulsory insurance.

Part of the money in the total amount of 111.7 million KM was reallocated for other purposes, 100 million in current reserves of the FBiH Government and 11.7 million KM to the Ministry of Health after the termination of the Law on Mitigation of Negative Economic Consequences. Nearly 286 million KM remained unused.

“The Report does not present comprehensive information on the implementation of measures to mitigate the consequences caused by the COVID-19 pandemic, which is, taking into account the allocations from the FBiH Budget for COVID-19, as well as the fact that for the implementation of the Law on Mitigation of Negative Economic Consequences only 18.63% (90,934,169 KM) of funds provided for these purposes (488,207,999 KM) were realized, it was necessary to explain in an appropriate manner,” the auditors stated.

There was a serious criticism in regards to the distributions of incentives, subsidies, aid to companies that fired huge amounts of workers, the law did not receive the expected effect.

Federal government ministers, after the audit reports showed their shortcomings, criticized the work of the audit and asked for a kind of apology. Instead of responding to all the illegalities and omissions, the Government now plans to practically falsify the report on its own success.

RESIDENTS OF THE LAND OF ABUNDANCE: What did Minister Turković say that we did not want to hear?