“POKRET ZA PREOKRET” or “MOVEMENT FOR CHANGE” IN ZENICA: Regulatory plans are catalogues of new buildings of the construction mafia

Solitaire in the place where the city park is today, the demolition of the iconic cinema on the site of which there should also be a building, a gas station on a green area near the roundabout, "beautifying" the area by building skyscrapers - these are just some of the examples from the disputed drafts of Zenica's regulatory plans. Nevertheless, the informal group “Pokret za preokret” or "Movement for Change" points out that the issue of spatial planning and urbanism, both in Zenica and in the whole of Bosnia and Herzegovina, is much broader and more serious.

At the beginning of October 2021, it was announced that the City Council of Zenica adopted and submitted for public review and public debate the draft decisions on the adoption of the regulatory plans of "Trg Alije Izetbegović", "Crkvice" and "Kamberović plain and slope". It was a sign for some of the citizens of Zenica, led by architect Boris Britvar, to raise their voices, try to warn the public about the harmfulness and illegality of these decisions, and to start a legal and institutional fight.

Žurnal journalists spoke with representatives of this informal group of citizens, gathered under the name "Pokret za preokret" or "Movement for Change". Solitaire in the place where the city park is today, the demolition of the iconic cinema on the site of which there should also be a building, a gas station on a green area near the roundabout, "beautifying" the area by building skyscrapers - these are just some of the examples that Boris Britvar points out, and which is foreseen by the contested drafts of regulatory plans. 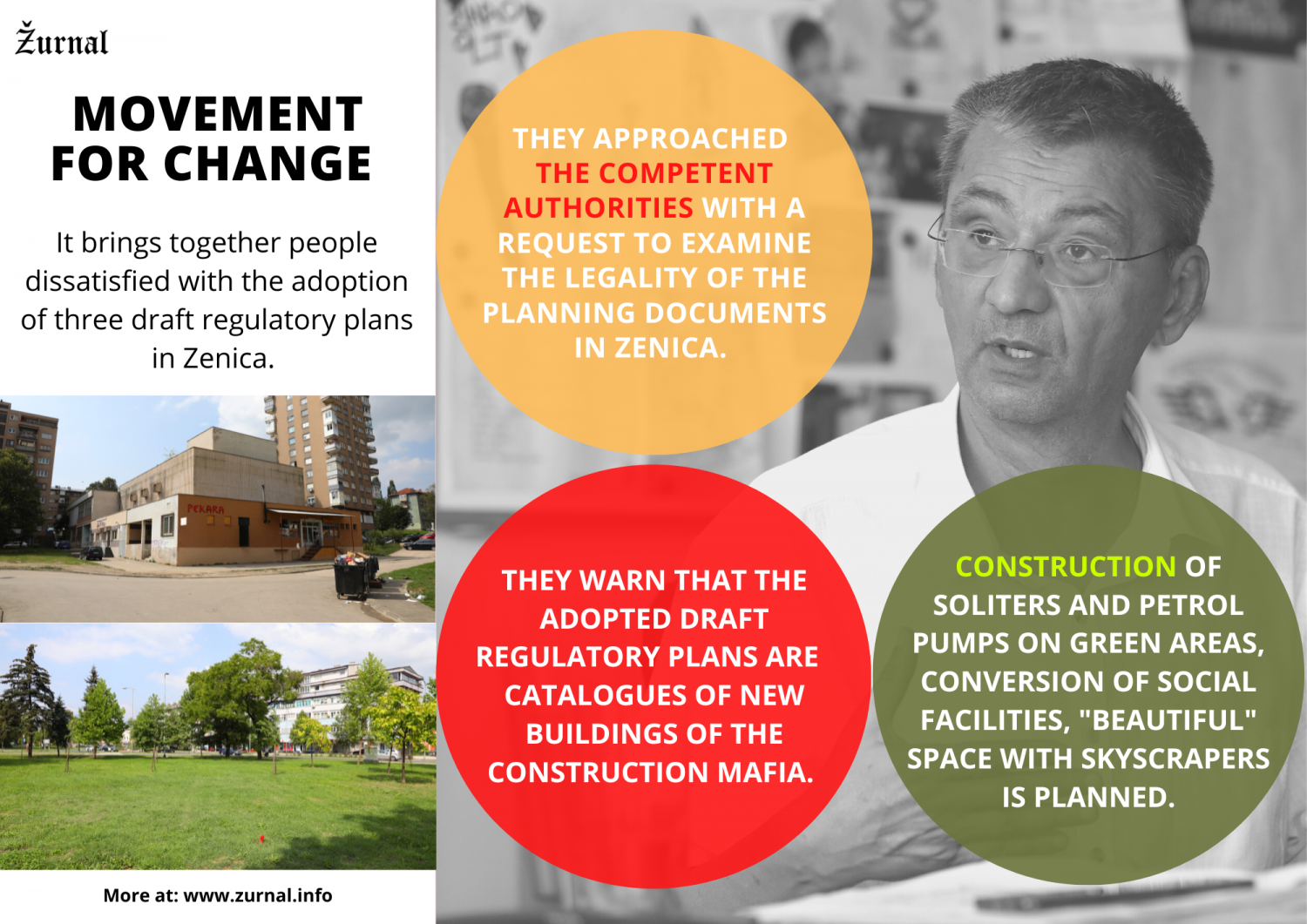 However, Britvar and his colleagues warn us that the issue of spatial planning and urbanism, both in Zenica and throughout Bosnia and Herzegovina, is much broader and more serious than these few prominent examples.

"It is, in essence, a science that requires exceptional continuity in work. During the war, we had a break in the preparation of spatial planning documentation, after the war everyone forgot that we needed to work on it, so urban planning was reduced to "we need to beautify the city". Urbanism has been reduced to the sphere of politics, and that is very bad," Britvar points out.

Although it is clear that there are pronounced problems related to spatial planning throughout the country, Zenica's "Pokret za preokret" is for now concentrated only on this city. Formally, this group started work in October 2021, and in less than a year they initiated several very significant procedures.

INSTITUTIONAL STRUGGLE AND WALLS OF NON-JURISDICTION

The legal and institutional struggle, as the activists point out, is being waged on several fronts. Their first request, even before they formally started work, was directed to the Commission for the Preservation of National Monuments in Bosnia and Herzegovina.

"Zenica, as a city ambient unit, has exceptional architectural and urban values, which derive from the urban plan of the city of Zenica from 1955, and we had an exceptional urban development after that. The most important names in architecture in the former Yugoslavia worked in Zenica. We submitted a request to the commission to establish and protect a narrow urban zone in Zenica, as a special cultural and historical value of Bosnia and Herzegovina. Unfortunately, we have not received an answer to this day," they explain to us from the "Pokret za preokret" in Zenica.

In the meantime, the City Council of Zenica adopted the draft decisions on the adoption of the aforementioned regulatory plans, which was a signal for the activists to turn to the inspection bodies so that they could review the legality of their adoption. As expected, the first problems appeared immediately.

So, essentially the same answer came from all three levels - we are not competent. Therefore, no one has yet checked whether the adoption of draft regulatory plans was done in accordance with the law.

On the other hand, the Ministry of Spatial Planning, Transport and Communications and Environmental Protection of the ZDK did not give its consent to the aforementioned regulatory plans, because compliance with higher-level planning documents was not respected.

When we talk about planning documents of a higher and lower order, the story becomes significantly more complex. The spatial plan, which Zenica has had since 2017, is a document of the highest order. It is the basis for urban plans, while urban plans are the basis for adopting regulatory plans.

When it comes to Zenica, the last time an urban plan was adopted was in the 80s of the last century! In the meantime, a lot has changed, that urban plan is outdated according to almost all parameters.

"The urban plan, among other things, also defines certain urban parameters that are related to construction regimes, namely the population density, the built-up coefficient of the plot and the coefficient of utilization of the plot. In the preparation of these documents, official statistical data must be used. For example, Zenica had about 146,000 inhabitants in 1991. According to the 2013 census, Zenica had about 110,000 inhabitants. That means about 36,000 fewer inhabitants, and according to the demographic projection, the number of inhabitants in our country will decrease by 51.6%. This is essential data for creating spatial planning documentation, so the question arises - why are we building apartments at all?" asks Britvar.

In other words, it is planned to increase the population density within the city core, which is in total contradiction with all European and world principles in the field of urbanization, our interlocutors agreed.

Given that Zenica does not have a current urban plan, it is quite clear that the City Council should not even discuss regulatory plans. After the "Pokret za preokret" began to draw attention to this issue, the talk about new regulatory plans was officially stopped.

However, this also led to a new problem and a new struggle for activists. As they explain to us, the cantonal law makes it possible to bypass the legal obligation to adopt planning documents:

"There is an article in the cantonal law that states that exceptionally, when there is no spatial planning documentation, the municipal expert commission can give its expert opinion for a specific location in terms of urban-technical conditions. Zenica has that commission and there were clearly abuses. Permits were issued for every pub, building on city green areas..."

The movement believes that the City Administration is misinterpreting this article of the law, especially the word "exceptionally", so they sent a request to the cantonal level for an authentic interpretation of this article. However, they still haven't received an answer.

In addition, they submitted to Mayor Fuad Kasumović a request to annul the decision on the adoption of draft regulatory plans, and they also addressed the Office for the Fight against Corruption of the ZDK. Also without much success. In the end, they filed criminal charges against all participants in the creation of the spatial planning documentation.

Once again, they remind us of the harmfulness of the adopted draft regulatory plans, which, as Britvar says, are more catalogues of new buildings of the construction mafia than plans made in accordance with the needs of the city and the people of Zenica.

"In these regulatory plans, there is no mention of the basic urban parameters of the construction regime, schools, kindergartens, fire roads, clinics, parking lots... which is decisively prescribed by law. These regulatory plans deal only with the construction of new residential and residential-business buildings and deal with the legalization of previously built buildings for which building permits have been issued. So, permits were issued, but there were no regulatory plans, and now they are drawing them in the new plans, in order to legalize the papers they issued earlier", underlines the architect from Zenica.

The "Pokret za preokret" continues its struggle, which, as they predict, will be long-lasting and arduous. However, they point out, if they succeed, the result will not only be significant for Zenica, but also for all other populated places in our country.