SCANDALOUS VISIT OF ERDOGAN: Mosque for Bosnia and Herzegovina, drones for Serbia that are produced by Bakir Izetbegović's godson

The Turkish president used his visit to directly support the SDA, interfere in domestic political situations and accuse the West of killing Muslims. He promised the Bosnians and Herzegovinians a new mosque and agreed with Vučić on the sale of combat drones produced by Bakir Izetbegović's godson.

Turkish President Recep Tayyip Erdogan visited BiH and Serbia again. He used his visit to Sarajevo to make a scandalous speech to the imams gathered in Rijaset of the Islamic religious community. He gave them instructions on who to declare terrorists, accused the West of killing Muslims, gave full support to the SDA and promised to build a mosque. In Serbia, he was more specific - he arranged economic investments, among others, the sale of drones produced by Bakir Izetbegović's godson!

There is nothing else, the SDA and SNSD leaders Bakir Izetbegović and Milorad Dodik can be satisfied with the messages sent by Recep Tayyip Erdogan, the President of Turkey, during his visit to Bosnia and Herzegovina yesterday. Of course, the visit was "packaged" as a formal state visit, but let's not lie, it was primarily intended to provide political support for the SDA and Bakir Izetbegović ahead of the general elections on October 2.

Let us remind you that in the 2018 election year, Erdogan held a kind of pre-election rally in favour of the SDA in Sarajevo under the guise of a rally for his AKP party. Lessons about democracy were shared then and now by the one whose autocratic regime imprisons political dissidents, the media, journalists, and all free-thinking people, changes laws and stifles democracy and freedom of speech.

This year, Erdogan visited the Rijaset of the Islamic Community in Bosnia and Herzegovina, where he was hosted by reisu-l-ulema Husein ef. Kavazović. The Turkish president used this opportunity to harshly accuse the "West".

- Respected brothers, the West exists to divide and tear Muslims apart. They want to divide them, tear them apart, and then swallow them. It is you who are and will be the biggest obstacle to that. That's why we shouldn't give them that chance...

The Turkish president very directly suggested to local authorities who they should declare terrorists.

"I urge you to be careful, especially when it comes to the terrorist organization FETO and its members. They attempted a military coup and wanted to kill me. They killed two of my police officers and seriously wounded two female police officers who were there. Part of them fled to Greece. Let's not allow the same game to happen in Bosnia and Herzegovina. I expect you not to allow space for the activities of FETO, whose structures still exist in BiH", Erdogan will say during his visit to Rijaset of the Islamic Community and conversation with reisul-ul-ulema Husein ef. Kavazović.

Erdogan did not fail to directly mention all the current political opponents of the SDA who emerged from the ranks of this party.

"Part of the people who were with me, whom I appointed prime ministers, ministers, left. By leaving, they didn't do anything to me, they only did it to themselves. There were also those who left my brother Bakir. And why are they leaving? ... Our Alija Izetbegović is here, with the martyrs around him, I have to protect his legacy, and by protecting that legacy, we will bring Bosnia and Herzegovina to the desired level", says Erdogan, alluding to the need for all-Bosniak unity, exactly what Bakir Izetbegović is basing the current election campaign of his party on, meaning that only the SDA can save and preserve BiH. 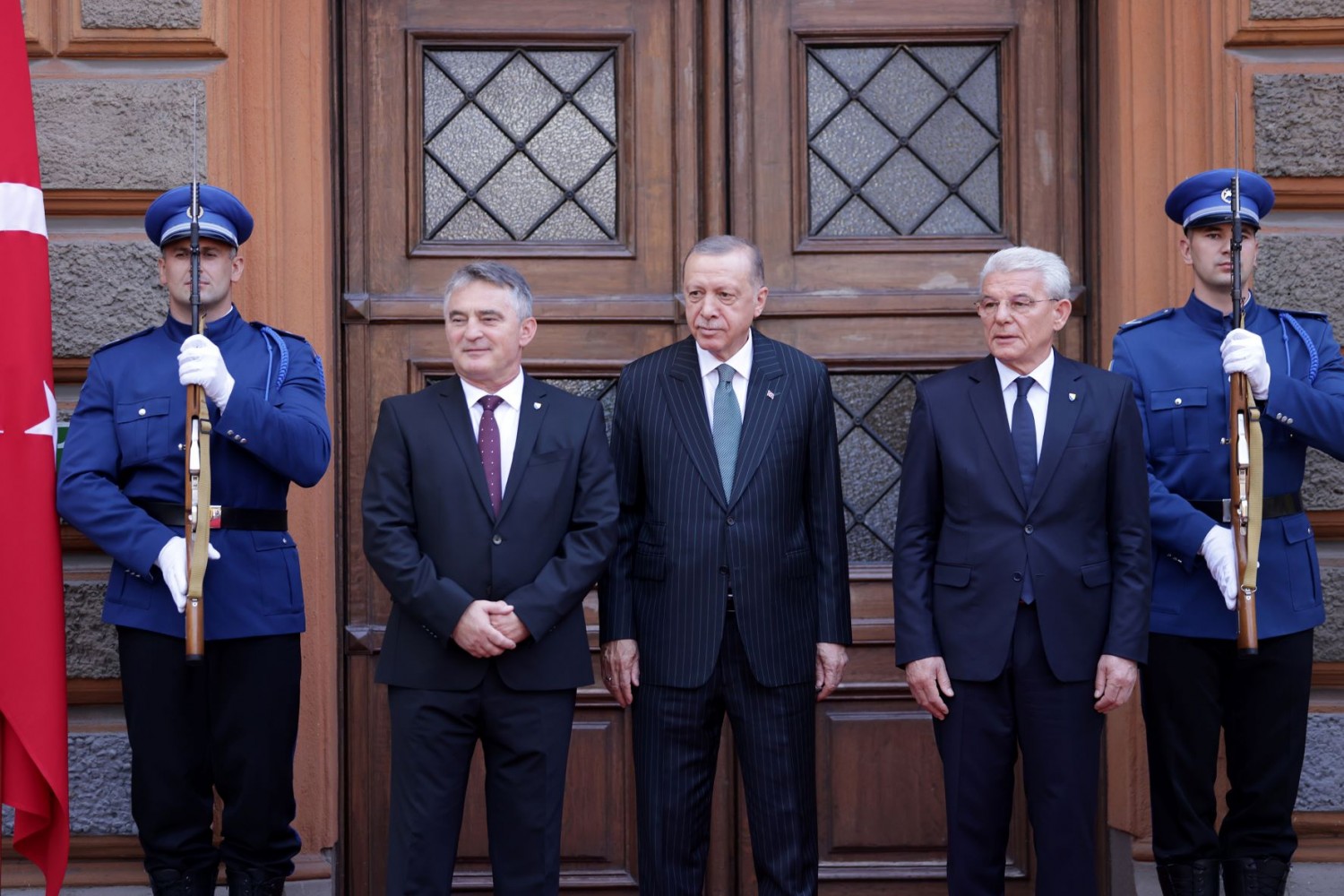 The Turkish president also commented on the possibility of imposing changes to the BiH Election Law, so he fully satisfied Željko Komšić, the leader of the Democratic Front, the coalition partner of the SDA, with what he said.

"The intervention of the high representative would be an intervention against the democratic process, which we do not support at all", Erdogan said.

As expected, he evaluated mutual economic cooperation as positive, especially since this cooperation is reflected in the enormous increase in imports from Turkey. Ah, yes, Erdogan will also allow BiH citizens to enter Turkey with only an ID card, I guess to make it easier for the post-war upstarts here, who buy apartments in Turkey with a ticket. For those more serious jobs and investments, Erdogan still prefers Serbia, and SNSD leader Milorad Dodik is a good mediator in this regard.

Dodik has two reasons to be pleased with Erdogan's visit. The first is that he likes to be servile to everyone who, like him, cultivates dictatorial manners, from those of medium calibre like Serbian President Aleksandar Vučić to great ones like Erdogan or Russian President Vladimir Putin. Erdogan is Putin's current partner, so it is his turn to warmly welcome "his friend's friend".

At the same time, Dodik also does work for Vučić, because Turkey invests a lot in Serbia, and in specific projects, where jobs are created.

This is where we come to the second, perhaps more important reason, the one of a monetary nature, where Dodik always finds an opportunity to profit from his construction and other cartels, especially on jobs in Serbia. For those in BiH, in order to realize the construction of certain sections of the highway towards Belgrade, which is largely financed by Turkey, the final route had to be agreed upon so that the money would start arriving. That's why, after months and months of stalling, he ordered SNSD's Minister of Transport and Communications, Vojin Mnitrović, to organize a meeting with the competent federal and Brčko District institutions as quickly as possible, and lo and behold, on the day of Erdogan's arrival, they triumphantly declared: "We have an agreed route"!

As Žurnal already wrote, Turkey entered this project, at least when it comes to Serbia, with the condition that their company be the contractor. It is about the company "Tasyapi", which is already carrying out works in Serbia, and which will probably build the most prominent part or the entire highway Sarajevo-Belgrade. In this context, the name of Omar Musabegović should be mentioned, who was presented by the media as a friend of a friend and the godfather of Bakir Izetbegović's daughter.

The day after his visit to Bosnia and Herzegovina, Erdogan was in Serbia. The President of Serbia, Aleksandar Vučić, expressed his intention to buy powerful military weapons, and unmanned aerial vehicles called "Bayraktar", even promising to pay a higher price. Those aircraft are the ones that, calling them "drones", Izetbegović cited as a guarantee of military power, but whose remains unclear.

Serbia will thus, in all likelihood, acquire those weapons as soon as next year. The director of that private family company that produces "drones" is Selcuk Bayraktar, the husband of Erdogan's daughter, whose godfather is Bakir Izetbegović.