DUE TO SUSPICIOUS TENDERS: IBM’s contract with “Prointer” has been terminated since 2019.

"IBM World Trade Corporation" and "IBM Ireland Product" on several occasions from May 2019 to February 2020 requested notification from "Prointer" regarding media announcements about rigged tenders, according to the documentation in the possession of “Žurnal”.

On March 6, 2019, “IBM World Trade Corporation” and “IBM Ireland Product” terminated their cooperation agreements with "Prointer". These two companies then, from May 2019 to February 2020, on several occasions requested a notification from "Prointer" regarding media announcements about rigged tenders, according to the documentation in the possession of Žurnal.

"IBM" and "IBM IP" problematized the way in which "Prointer", a company connected with the family of the member of the Presidency of Bosnia and Herzegovina, Milorad Dodik, does business with public companies and institutions. After the termination of these contracts, on July 18 of the same year, the nervous Dodik before the deputies in the Parliament of Republika Srpska finally confirmed what he did not really want - the connection of his son Igor with "Prointer". 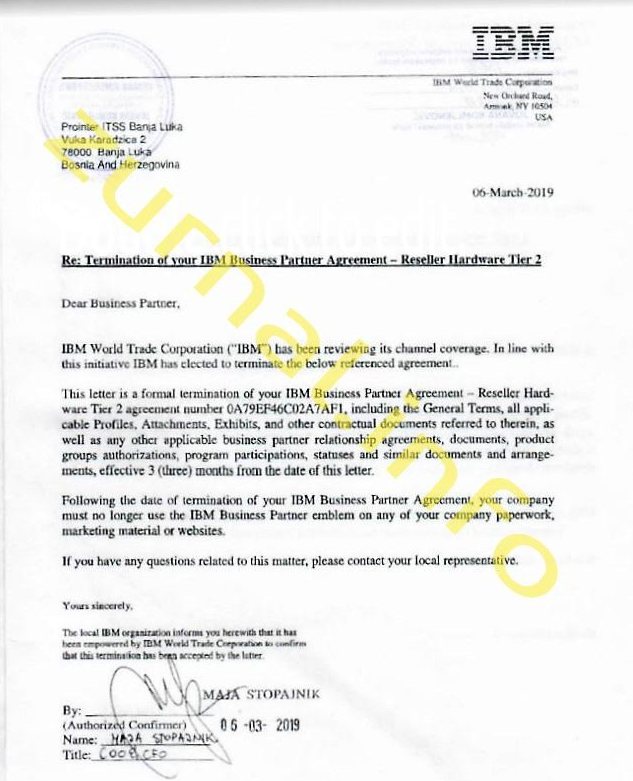 The recent arrival of US President Joe Biden's special envoy for the Western Balkans, Gabriel Escobar, seems to have given Dodik a new headache:

"We have discussed sanctions and sanctions are on the table. And not only sanctions, there are other economic resources that can be implemented not only against leaders who carry out anti-Dayton activities, but also against those who support them, against companies that help them", he announced.

These reasons for the unconfirmed termination of cooperation with "Prointer" were stated by the companies "Microsoft", "DELL", "HP", "Oracle" and SAP, which were confirmed by the sources of the opposition MP Nebojša Vukanović.

"I received confirmation of this information from two sources. If I was wrong, they would immediately deny it through their television, “Alternativna televizija”, which is owned by ''Prointer''", Vukanović told Žurnal and added that a source from the Government told him that they were worried, because many institutions could be denied licenses, and their work disabled.

This was interpreted as the first package of sanctions against the SNSD leader due to his war provoking politics, decades of unprocessed crime and corruption. It is obvious that the private IT tender business was a great source of income and that this could be a severe blow to the financial balance of the Dodik family.

The long-term writing of Žurnal about the uncontrolled outflow of public money to the family account was confirmed by the Basic Court in Banja Luka with a verdict from August 19 this year.

Although the leaders of "Prointer" have denied any connection with the Dodik family for years, as well as the influence on the decisions of the directors of public companies, Žurnal continuously monitored public procurements in which the company, mostly as the only bidder, received jobs worth tens of millions of marks. Putting incredible pressure on the Žurnal’s journalists, "Prointer" filed several defamation lawsuits. However, with numerous pieces of material evidence, the court rejected the first one. Interestingly, Prointer did not appeal this decision. According to unofficial information, legal advisers told the encouraged "businessmen" that there was no basis for prosecution. While Žurnal is waiting for new summonses for hearings, the final verdict is clear!

Our explanation that we have been following the work of "Prointer" for years and that we have data on how this company has concluded a huge number of contracts with the public sector in recent years and thus generated significant revenues, the court confirmed, believing that "it is not disputed that the company took power over the IT industry in the RS and has become one of the main partners of the public sector, which is a well-known fact that extends through all media. "

"This expression cannot be considered defamatory, so the court considers that there are no elements of reputation damage that would justify the award of non-pecuniary damage", reads the court’s final decision.

The last in a series of overpriced contracts for a company that has a son Igor in its registers as an "associate" was awarded by Luka Petrović, director of "Elektroprivreda RS" and general secretary of the ruling SNSD. While his party boss Milorad threatened a new bloody war, a new robbery of public money to help the supreme family was carried out far from the eyes of the public. The first channel through which 22,000,705 KM passes leads to "Prointer", and the second, for the outflow of 9,827,860 KM, to the company "Dwelt" of Stefan Krneta, son-in-law of the former Minister of Health Ranko Škrbić. In total it is 31,828,565 KM!

On September 30, he signed a contract with "Dwelt" for 9,827,860 KM, which he estimated as "maintenance of the software platform for supply". Namely, Krneta is a partner of "Prointer" for business in the energy sector.

EVERYTHING FOR THE LEADER

All personal data of the citizens of Bosnia and Herzegovina are in the databases of "Prointer"!

RESIDENTS OF THE LAND OF ABUNDANCE: What did Minister Turković say that we did not want to hear?