Smuggling of migrants is most profitable in Turkey, Greece or countries of origin, and human smuggling services are also offered within the Western Balkans: in BiH, it is most pronounced in the Una-Sana Canton. Organized crime is a business that generates hundreds of millions of euros a year in illegal profits. It is estimated that about 65 tons of heroin per year pass through Southeast Europe

Smuggling of migrants creates significant illegal financial flows for smugglers who take millions of euros to cross the borders of Bosnia and Herzegovina and Serbia.

The migrant smuggling market in 2020 in Bosnia and Herzegovina alone is estimated at around 8.5m to 10.5m euros, said Anesa Agović, coordinator of the Global Initiative for BiH.

The Balkan route has been a key migration channel to Western Europe since 2015. After increased border restrictions, such as the construction of border fences and protective measures against Covid-19, a lucrative market for migrant smuggling is being created.

Due to frequent robberies, but also other dangers and obstacles they encountered on their way to EU countries, they stopped carrying large amounts of money. They pay smugglers by sending or withdrawing funds from a fast money transfer mechanism such as Western Union or MoneyGram, once they arrive at an agreed destination.

"In theory, it creates illegal financial flows that are easier to detect. However, low detection and prosecution rates encourage the participation of ordinary citizens in smuggling, which further undermines the local economy", said a new report by the Global Initiative against Transnational Organized Crime entitled "Illegal Financial Flows in Bosnia and Herzegovina, Montenegro and Serbia: Key drivers and current trends". This report reveals the main drivers and trends of illegal financial flows in these three Western Balkan countries.

The most money is earned from smuggling migrants in Turkey, Greece or countries of origin, which Žurnal wrote about earlier. However, human trafficking services are also offered within the Western Balkans, especially in the north on the borders with the EU.

"There, smuggling services are usually offered at certain points that are difficult to cross, such as the Una-Sana Canton in BiH (crossing to Croatia) or the northern border of Serbia (crossing to Hungary and Romania), which is especially difficult to pass", said the same Global Initiative report. 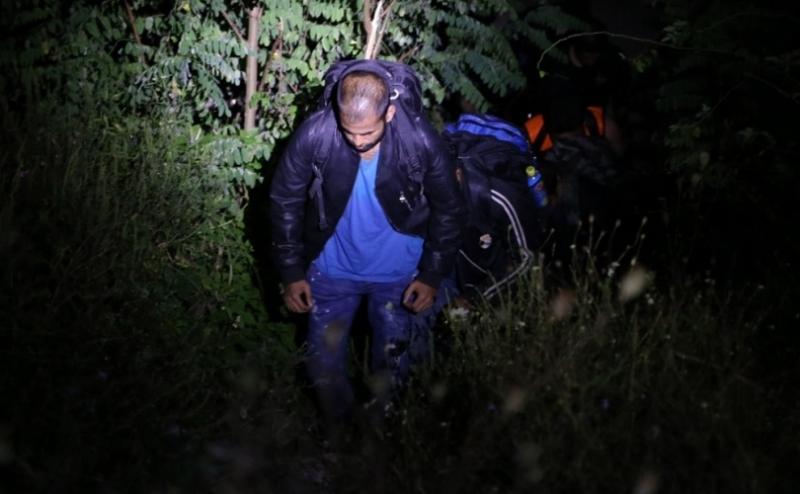 We also wrote that the smuggling of migrants is closely related to human trafficking, which manifests itself in the form of labor exploitation, which is most pronounced in Herzegovina, and sexual exploitation, which is more prevalent in Krajina, through which most people move. Earlier, Anesa Agović told Žurnal that these two criminal acts are very often intertwined: "It starts with smuggling, and ends with human trafficking."

According to a Global Initiative report, when investigating the smuggling of migrants along the Balkan route, little attention is usually paid to Montenegro, although the migrant route passes directly through the country. Migrants enter Montenegro in the south from Albania and often move directly to Pljevlja, with the help of smugglers or in autonomous groups. From there, they continue to BiH or Serbia.

Depending on the smuggling service required and the sophistication of the smuggling network, this part of the trip can cost between 150 and 5,000 euros per person. Crossing the Adriatic from Montenegro directly to Italy by boat is much more expensive.

Organized crime, which includes migrant smuggling, drug trafficking and illegal trade, has been booming in the Western Balkans for years. This is a business and a key component of illegal financial flows in BiH, Montenegro and Serbia, which generates hundreds of millions of euros a year in illegal profits. 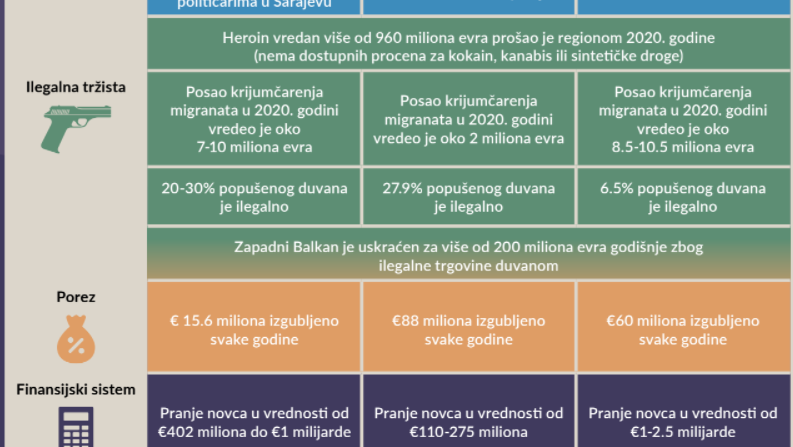 "It is a lucrative business, as evidenced by the fact that heroin doubles in value from the Western Balkans to the EU", according to a report by the Global Initiative against Transnational Organized Crime.

Heroin enters the region from Turkey on its way to Western Europe. The United Nations Office on Drugs and Crime (UNODC) estimates that 60-65 tonnes of heroin pass through Southeast Europe each year - worth more than 960m euros in 2020.

"It is clear that, given the role of the Western Balkans as a transit route, these financial flows are likely to be illegal financial flows", the report said.

Large flows of heroin pass through northern Macedonia and Serbia, with Niš being a key trade hub in southern Serbia. Rožaje in Montenegro has also been identified as a key center for heroin storage and distribution.

Cannabis is the most commonly used and seized drug in the Western Balkans. Although Albania remains the largest producer in the region, indoor cultivation has been reported in both BiH and Serbia.

Cannabis cultivation facilities in BiH were discovered in Srbac in July 2019, in Banja Luka in June 2020, as well as in Prijedor, Posavina, and Semberija in the north. Wholesale prices range from 1,000 euros per kilogram in Montenegro to 1,550 euros in BiH and 1,900 euros in Serbia, depending on quality and availability.

Illegal trade in conventional goods, such as tobacco and clothing, is another major driver of illegal financial flows. Estimates show that more than 20 percent of the tobacco market in BiH and Montenegro is illegal, and that these countries act as transit countries for more profitable EU destinations of illegal goods.

The report notes that analyzing the extent of illegal financial flows related to crime is not an easy task, and that no attempt has been made to comprehensively assess the value of illegal earnings earned by organized criminal groups active in the Western Balkans.

In addition, no attempt has been made to determine the share of these revenues in illegal financial flows.

THREATS, INSULTS AND MEDIA LYNCH: The suppression of freedom of speech in Vučić's Serbia
Pročitajte još
MIGRANTS - PEOPLE WHOSE SUFFERING EVERYONE MAKES MONEY ON: Smugglers pimp boys as payment for crossing the border
MIGRANTS AT THE FASHION SHOW: Glamour, fashion, camps and batons